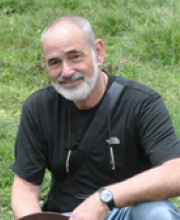 The micro- to nano-structure of acellular fish bone

Most vertebrates have a skeleton that has cells embedded within the mineralized matrix. These cells are called osteocytes, have numerous important functions and form 90% of the cells of bone. It is therefore a curious and unexplained observation that the only vertebrates that totally lack these cells are evolutionarily-advanced fish (less advanced fish have a large population of osteocytes, like the rest of the vertebrates). We study this phenomenon, try to understand why it came about, and how it affects the structure, function and physiology of the anosteocytic skeleton.

The structure-function relationship of the lower pharyngeal jaw of the black drum (P. cromis)

The black drum is a durophagous fish with powerful pharyngeal jaws that are used to crack hard food like shells. Yet the pharyngeal jaws consist of bone that is highly porous, an expected phenomenon when one considers the huge forces they must support. We are studying the details of this architecturally-complex organ to understand its structure-function relationships.

The effect of metabolic bone diseases on cortical bone

This project is led by Dr Anna Shipov. Metabolic bone diseases, such as chronic kidney disease, diabetes and osteoporosis, affect the skeleton. We are trying to characterize the changes occurring in the skeleton as a result of these diseases, using as model animals in which the disease develops naturally, rather than healthy lab animals in which the disease is artificially induced.

Osteodentin: bone, dentin or neither?

Osteodentin is a type of dentin seen mostly in fish teeth. We study its structure and function using as model the teeth of the north Atlantic wolffish

The skeleton of the sturgeon A. anarthicas

This project is led by Dr Josh Milgram. Sturgeons belong to a very distinctive and ancient group of fish (order Acipenseriformes) dating back over 200 million years ago.  From an evolutionary perspective, sturgeons are among the oldest vertebrate species on earth today, and have undergone very little morphological, molecular and genetic change over time. Using a complete set of microscopy techniques, focused ion beam combined with scanning electron microscopy, and micro-nanotomography, as well as various mechanical testing protocols at different length scales. The overall objective is to gain insight into the development, structure and mechanical properties of the lamellar bone comprising the pectoral fin spine and first pectoral fin ray of the sturgeon (Acipenser gueldenstaedtii) – which can be considered primordial lamellar bone.

The goal is to characterize the structural, compositional and material features of long bones in few Chiroptera (bat species), in order to better understand the adaptation to flight in these mammalian species. Different techniques of microscopy, as well as micro-Ct analyses are employed. These are combined with mechanical testing as well as bone material properties analyses.

We investigate dietary specialization and convergence in the teeth of snakes. A combined quantitative morphometric approach with structural and biomechanical studies will be performed on a large number of snake species, using a variety of microscopic techniques, microtomography mechanics.

This investigation studies the impact of the habitat on bone structure and properties by comparing the skeleton of Xenopus laevis collected either from the center or the edge of a range located in the Western part of France. Structural analysis using µCT is combined with mechanical testing performed on femora obtained from frogs from the two regions.